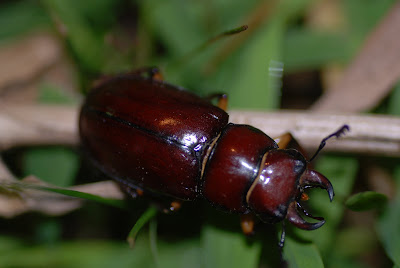 Reddish-Brown Stag Beetles (Lucanus capreolus) are found throughout the Eastern portion of the United States and parts of Canada. Like their name suggests they are a dark reddish-brown in color.  They are large, reaching lengths up to 2 inches. The males have large mandibles that are used in sparring with other males for the attention of suitable females. Mating takes place in decaying logs, stumps etc. Once mated the female will lay eggs within decaying wood. The larvae will live in the decay and feed off the juices retained in the wood pulp.  Their growth is slow, after two years as larva they will head to the soil and burrow underground to pupate, and emerge later in the season as adults. These beetles can be found in deciduous woodlands and nearby areas, and often come to lights at night. The adults are attracted to moth bait, aphid honeydew and possibly rotting fruit. Even with their large mandibles they are capable of flight. Last year we had several of these large beetles that kept appearing at a mercury vapor light and sheet that I had set out to attract large silk moths. Some evenings there would be as many 5 or 6 on the sheets. I have yet to see a male.