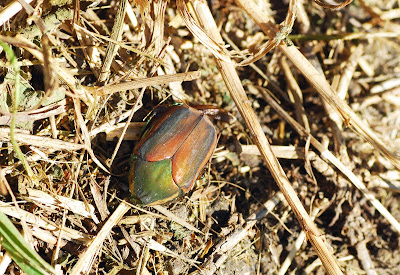 Green June Beetles (Cotinis mutabilis) are in the same family as June Bugs or May Bugs, called Scarabaeidae. These are the scarab beetles. When you dig around in your back yard and you come across those fat little white grubs chances are they are the larvae of one of the species of June Beetles. Green June Beetles are fairly large at about one inch in length. Their coloring is a bit different than most June Beetles, instead of being brown or black they are green with tan or bronze stripes on their wings. Their underside is a beautiful metallic sheen. These beetles are most often found near gardens, but can also be found in backyards, and in orchards where the adults will sometimes feed on the fruit. This is an exception to the rule as the adults generally don't eat.
Mating occurs in the early summer months, and after mating, the female will lay tiny white spherical eggs. When the eggs hatch the larvae will feed on the roots of turf grass or other organic material. Because of their food preferences they often cause damage to yards. This damage can be minimal to severe depending upon how extensive their population is. When they reach two inches in length they are ready to pupate. A unique characteristic of this grub is its habit of crawling on its back using its abdominal muscles to gain traction as it moves. There will be one generation per year. The adults will appear in June and continue to be around through September. When they fly around your yard they sound like bumble bees. Just goes to show that not every big bug buzzing around our head with a very loud wing beat is a bee, it just might be one of these large June Beetles.
Posted by Shelly Cox at 10:30 AM