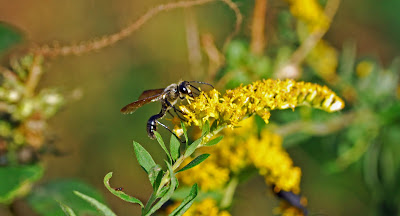 Grass Carrying Wasps (Isodontia mexicana) are found throughout North America as well as Central America. They are medium sized wasps that reach about 1 1/2 inches in length. Their bodies are black with a very thin waist that connects the thorax to the abdomen. Some specimens may have an orange marking on the tip of the abdomen. The thorax is covered in fine hairs. They are sometimes called Cricket Hunters from their preference of using crickets as a host insect for their larvae. After mating, the female will locate a pre-constructed nest in rotting or decaying wood. Within this nest she will create brood cells. These nests will have several brood cells divided by thin walls. Each chamber is generally lined with bits of grasses. The female will provision each cell with a cricket or sometimes a katydid. She will then lay an egg on each host. When the eggs hatch the larvae will feed on the host as a parasite of sorts. In about 4 to 6 days they will be ready to pupate and in another 5 to 6 weeks the adults will emerge. These are common wasps, and often seen in gardens, grassy areas, meadows, and near woodlands. The adults nectar at a wide variety of flowers. These wasps will sometimes be found nesting in storm windows, they use the tracks as an exisiting site for nest provisioning. These wasps are very similar to Thread-Waisted Wasps.