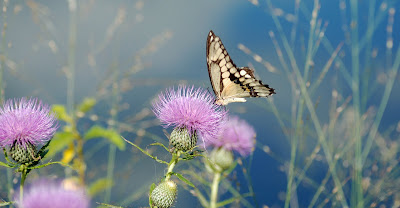 Giant Swallowtails (Papilio cresphontes) are the largest butterfly in the United States and Canada. They have wingspans that measure up to 5 1/2 inches. They have one of the widest ranges of any of our swallowtail species. They can be found from Central America to Southern Ontario. Within the United States they will be found all throughout the South, as well as the Northeastern portion of the country. Occasionally they will be found further north into North Dakota, and provinces further north in Canada. They favor areas near streams, open woodlands and fields close by. In the southern most portion of their range they can be found in citrus groves and are commonly called Orange Dogs. The host plant for the caterpillars is plants in the citrus family. Common Pricklyash and Common Hoptree are most commonly used. The adults nectar at a wide variety of herbaceous plants, and shrubs. After mating, the females lay eggs singly on the leaves of the host plant. The caterpillars will pupate and overwinter in this stage, tucked away in a cocoon.