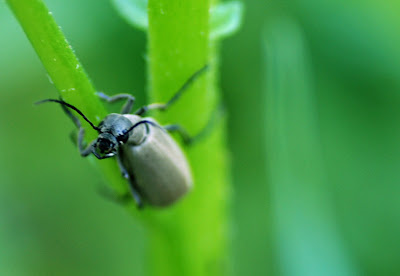 Blister Beetles in the Family Meloidae are found throughout most of the United States. There are many different species, but each one has an elongated body with a very narrow thorax. This cylindrical shape is very typical of blister beetles. They are commonly found in  vegetable and flower gardens. Look for them near croplands, especially forage crops. The adults feed on a wide variety of foods like clover, alfalfa, soybean, radish, carrot, beans, cabbage. In the wild they will feed on pigweed. They also will feed on ornamental plants like Hostas. The black variety is especially fond of goldenrod. After mating, the females will lay eggs in clusters in the soil. After the larvae hatches it will seek out grasshopper eggs and young grasshopper nymphs that are beginning to surface from underground. Sometimes they will also feed on bee larva. This makes them an important natural control measure for these often time invasive insects. Blister Beetles aren't always the "good guy" however. They have a dark side. Blister beetles contain a chemical in their legs called cantharidin. This chemical is extremely toxic, especially to horses. The horses come in contact with the beetles in their feed. The beetles feed on alfalfa, then the horses also feed on the alfalfa. As few as 550 beetles can kill a young horse weighing 275 pounds. This chemical is also found in the controversial drug called "date rape drug". 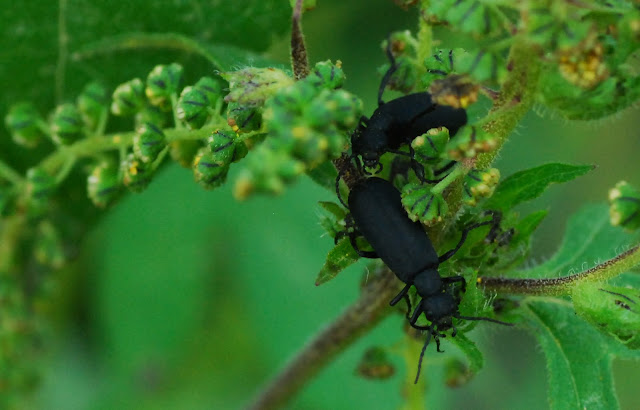 I myself have had a run-in with these beetles. A couple of summers ago we had 100's of these beetles all over our farm. They were in the gardens, in the flowers beds. They were feeding in large numbers on my hostas, and had nearly defoliated the hostas before the summer was over. At night they were around the pole lights. I also spent a lot of time near the pole lights, looking for bugs to photograph, or capture for my collection. One night I felt one of these beetles land on my neck, as I went to brush it off me it released some of this awful chemical and blistered my skin. This blister hurt for days and left a welt for over a week. These beetles mean business, this is chemical warfare at its finest. 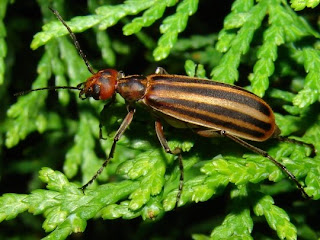 These beetles are best looked at and not touched. They are common and easily found, some years there seems to be more of them, than other years. In the past two years I've not seen populations of them anywhere near like what I had two summers ago.

Pictures:
1.) Ash-Gray Blister Beetle
2.) Black Blister Beetle
3.) Striped Blister Beetle (picture by: Steve Scott) This is the variety that blistered me, and from what I've read this species contains higher concentrations of cantharidin than the other two species pictured here.