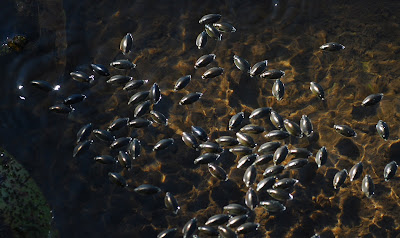 Whirligig Beetles (Gyrinus limbatus) are fascinating insects. They are found throughout the Eastern portion of the United States and are very common in Missouri ponds, lakes and slow moving streams. They are small beetles at about 1/2 inch in length, and they are often found in groups like the ones pictured here. They're shiny black or brown with yellowish colored undersides. They have very unique compound eyes that are divided giving them a "Four-eyed" look. This allows them to see above and below the water simultaneously. Essentially allowing them to hunt for food found in the water and watch for danger from above the water, or vice versa. There is a bubble of air trapped underneath their abdomens which allows them to dive and swim under water for long periods of time. They earned their common name of whirligig from the habit they have of swimming rapidly in random circles when alarmed. Mating between these beetles takes place in the early spring. Mating can take as long as a few hours or as little as a few minutes. After mating, the female will lay her eggs in clusters on the stems of aquatic plants. The adults die shortly after egg laying. In about 2 weeks the new larvae will hatch. They will complete their growth cycle to adulthood in about 3 months. The adult beetles will leave the water and build a pupal cell in the mud near the waters edge. They will remain in this cell for approximately one week, and will emerge as the final matured adult. This typically takes place with a large population of beetles all at once, creating large aggregations of these beetles on the surface of the water. There can be as many as 200,000 beetles in these population explosions. This grouping behavior also aids them in avoiding predation..."safety in numbers". Whirligigs overwinter in the mud or bottom sediment of ponds and lakes. They are completely predacous and feed on other small invertebrates. If you were to handle one of these beetles it is said they give off an apple odor.
Posted by Shelly Cox at 12:17 PM