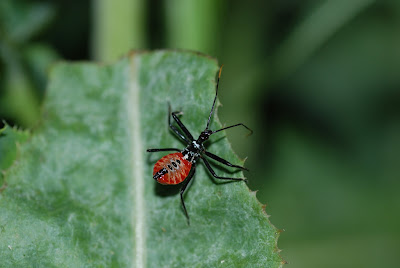 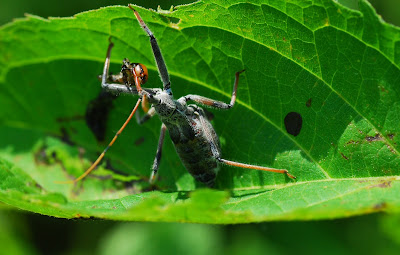 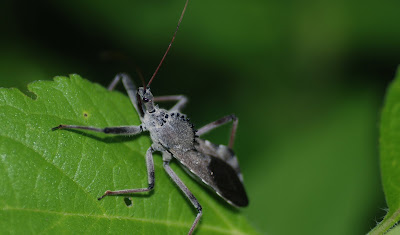 Wheel Bugs ( Arilus cristatus) are crazy looking bugs. As a nymph they look nothing like their adult counterpart. The young are shiny black with a bright red abdomen (or butt as was described to me the other day...LOL). As they grow and shed their exoskeletons they begin taking on that trademark gray color. Then as they near adulthood they begin getting that odd looking cog shaped "wheel" on their thorax. This bug cannot be mistaken for any other species. Wheel bug are the largest of all the assassin bugs in the United States, growing up to 2 inches in length. They are throughout most of the United States, Ontario, Canada, Guatemala and Mexico. Look for them in gardens, prairies, along roadsides, or anywhere other insects can be found in ready supply for them to prey upon. Mating takes place in the fall, and the male will guard the female to keep other males from moving in on "his" female. After mating, the female will lay clusters of 42 to 182 eggs on trees, bushes, or other vegetation. The eggs overwinter and hatch in the spring. These newborn nymphs are tiny and vulnerable. They are susceptible to predation even by their own kind. They grow at a very slow rate and usually reach adult size by August in Missouri. The babies are master hunters and will feed on most any insects they can capture. The one pictured in the second photo had just dined on a caterpillar. He injected his piercing "beak" and sucked out the life fluids of the unfortunate caterpillar. These bugs can give a painful bite. It is reported to hurt worse than a hornet sting. I've never handled one, never willing to take the chance. I would say it is best to look but not touch in the case of this odd looking insect.