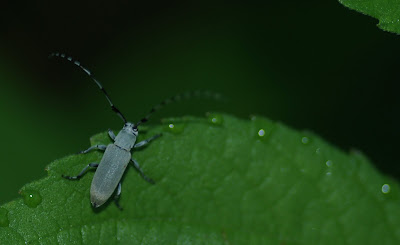 This small longhorn beetle is the Soybean Stem Borer (Dectes texanus). They are found throughout the Central, Eastern and Southern United States and are a native species. They feed on wild legumes such as Cocklebur, wild sunflower and giant ragweed. In the 1920's many farmers throughout the country began planting soybeans which is an exotic plant in the legumes family. By the 1940's soybeans were fast becoming a staple crop for farmers. It didn't take long for these borers to latch on to this new food source and by the 1960's they were feeding on soybeans much to the frustration of the farmers who feared losing their crops to this little beasty. They also began feeding on cultivated sunflowers. It is estimated by one report I read that 10% of soybean crops can be lost to just one beetle (http://www.pubmedcentral.nih.gov/articlerender.fcgi?artid=1615232).That is a significant amount, especially if your field has hundreds of these beetles present. In the fall when the larva are ready to settle down for winter (diapause), they will girdle the lower stem of the soybean plant from the inside to make a chamber in which to overwinter. This severely weakens the plant and the slightest touch can break the stalk. Sunflowers are also used for this purpose, but the beetle has a more difficult time girdling larger sunflower stalks. In the wild these beetles are hugely beneficial in keeping invasive weeds in check. With the good also sometimes comes the bad, and in this case it is the harm caused to the agricultural field.
Posted by Shelly Cox at 9:20 AM