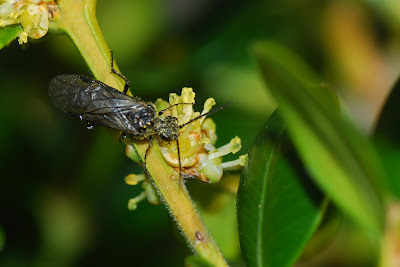 This first image is of an adult sawfly, in the same order as bees and wasps, Hymenoptera. The following four images are of the larval stages of various sawflies. 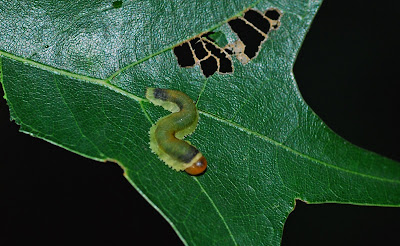 ), or very closely related.
3.) This is a Butternut Sawfly, they feed on Walnut and Butternuts. These white "hairs" are waxy filaments. These filaments earn them the nickname of Butternut Woolyworm.
4.) This beautiful purple and orange one is (Arge humeralis 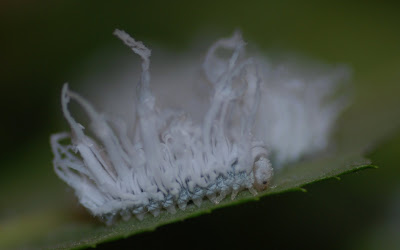 ). They feed on poison ivy...gotta love that!
5.) This last one I have not been able to identify.
There is some confusion in telling them apart from the caterpillars of moths and butterflies.

According to Abigail Parker from bugguide.net there are ways to distinguish them.
"Sawflies have more prolegs - 6 or more, whereas caterpillars have 5 or fewer. The first pair of prolegs on a sawfly is on the 2nd abdominal segment; on a caterpillar it's the third segment or farther back. Overall, sawflies look "leggy" without much space between the thoracic true legs and the abdominal prolegs.

Sawflies have one eye on each side of the head - caterpillars have 6. Of course, they're tiny and very hard to see, but if the insect has a light-colored head or has just molted, the eyes of sawflies are surprisingly prominent. I notice them even at early instars, while I've never been able to see a caterpillar's eyes without magnification."
There seems to be no shortage of sawflies around our farm, and each is unique and odd looking.
They come in so many different colors and shapes. I actively look for them now. It is much like Christmas, finding those brightly colored packages and trying to figure out what species it is. So now a new hobby is photographing these amazing creatures. 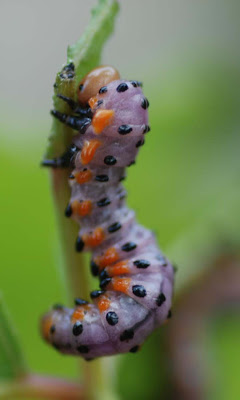 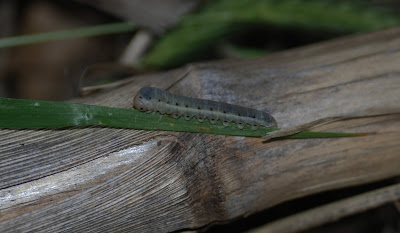