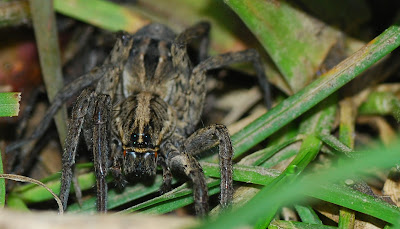 I believe this is some sort of Wolf Spider, she was approximately 2 inches long, legs and all. She was carrying around an egg sac attached to the end of her abdomen. She was rapidly moving through the grass when I spotted her. She became very defensive with me as I tried to stop her travels for a picture. She would throw her front legs into the air and rear her head up. After awhile she calmed down and sat for a photo. Does that face not look almost resigned, or bored with the whole affair. I spotted one other species similar to her that was carrying young around on her back, but I was unable to coax her out of the tall grasses for a photo. These are such awesome spiders, great natural bug control.
Posted by Shelly Cox at 9:05 AM