Bugs do more than pollinate 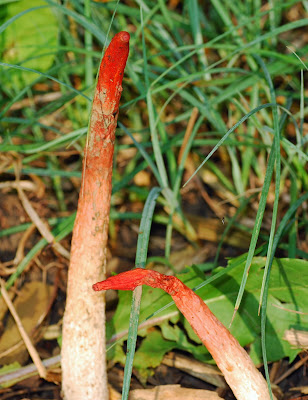 Pictured here is a fungus called a Stinkhorn. I'm unsure of the species. I am having difficulty locating a picture that matches mine. Most of the pictures I located have a green slime coated on the top portion of the spike. These did not have the slime so I am wondering if the slime had washed off in the early morning rain. Or perhaps it had been removed by the insects (flies). These crazy fungi often take people by surprise, often showing up unexpectedly. Some individuals are dismayed to have them in their gardens. It doesn't take much imagination to see how they look very much like a phallus. So several of these penis-shaped appendages sprouting up in your garden can make for entertaining and interesting conversations. Then there is the smell from whence they get their name. As these fungi mature they have a very raunchy smell that in some species can be overpowering. Some people are so offended by the off-putting smell that they go to great lengths to remove them from their gardens. One method used is boiled water mixed with bleach. Pour the hot liquid over the offending fungus on a daily basis until all signs of the mushrooms have disappeared. It is this smell that aides in the distribution of this crazy mushroom. 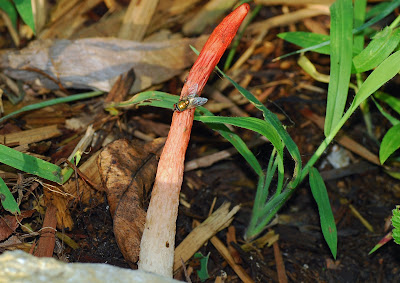 Flies and other insects are attracted to the smell, they crawl all over the slimey portion of the fungus. It is this slime that contains the spores. The flies pick the spores up on their feet and carry them to another location, where the spores will readily spread. Stinkhorns are noted as being prolific. Many have been brought over from other countries and seem to adapt very easily to their new environments. They are found in moist mulched areas, such as mulched flowers beds, or in timbered areas that have dead or decaying wood, also found near trees where a lot of beetle activity produces sawdust at the base of trees. They will also be found in lawns, meadows, open fields etc. They begin to appear in the mid to late summer months and will be around until fall. They are very common in the Eastern portion of the United States, less so west of the Rockies. This particular species was approximately 5 to 6 inches tall. The top 1/3 of the stalk was bright red and the base was white. From all accounts that I've read the "button" of the fungus is edible. It must be harvested in the early stages of the appearance of the stalk. As the stalk ages it will begin to stink and be unedible. I'm not sure I would want to try them, my bravery extends to morels but when it comes to other fungi I'm a bit less adventurous. Sickness or death by mushrooms doesn't sound too appealing. By late in the evening the flies were covering the entire stalks of these specimens and gave the appearance that it was black instead of red. These were a neat surprise to find in the flowerbed last night, fortunately no offensive odor was present. Nature never ceases to amaze me.
Posted by Shelly Cox at 9:39 AM