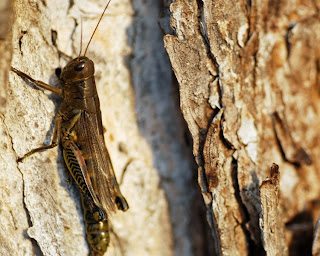 Last October I was wondering around my yard looking for what remaining insects that were brave enough or strong enough to have survived the hard freeze we had the previous night. The temps. were in the upper 60's and the sun was shining. I spotted numerous Asian Lady Beetles and Box Elder bugs on the south side of the house, a few hardier wasps and flies buzzing around. Then I came across this grasshopper resting on the side of a tree in our front yard, I approached him and he continued to sit still, I snapped a few pictures and moved in closer and still he didn't move. After advancing on him to the point of being a mere few inches from him I got suspicious. I reached out and touched him and discovered this poor little fellow didn't survive the freeze and apparently froze in place. Morbid or Fascinating? Not sure....but definitely Mother Nature in action.
Posted by Shelly Cox at 9:33 AM