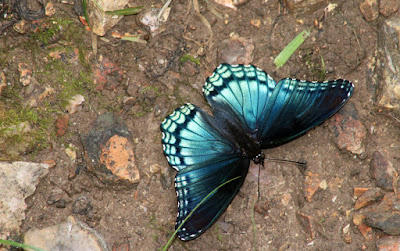 One of the most magnificent woodland butterflies to call Missouri home is the Red-Spotted Purple (Limenitis arthemis). They are now considered to be the same species as the  White Admiral (Limenitis arthemis) and occur throughout the Eastern United States. The species name of "arthemis" comes from the Greek Goddess of the same name, she was the Goddess of the hunt and the wild.  Occurring in woodlands, woodland edges and suburban areas they are a fairly common sight to see in mid-summer through fall. Spotting a flash of bright blue as it wings past you to some unknown destination up ahead is sure to grab your attention.

Historically it was believed that the Red-Spotted Purple and the White Admiral were entirely separate species, but after DNA testing and much laboratory research by individuals who do that sort of thing, it was determined they are the same species. The RSP has iridescent blue or blue-green upperwings, and a dark brown underside. The forewings have two reddish-orange lines near the base of the leading edge; the hindwing has a series of reddish-orange spots marginally and sub-marginally. There is a lot of speculation as to why this species was named Red-Spotted PURPLE, when clearly the wing are bright blue or blue-green.....perhaps the person(s) who were responsible were color-blind? 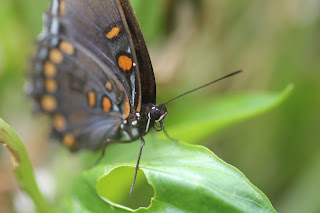 The WA has a black upperside with broad white bands on both wings. The underside is reddish-brown with white bands that match the upperwings. The wingspan of both species is considered large and may reach up to 4 inches. Males and females look identical, but females are typically larger.
The White Admiral is almost entirely a Northern species whereas the Red-Spotted Purple occurs in the Midwest and upper Midwest. I have never seen a WA and consequently do not have any images of them.

Where their populations overlap it is common for them to interbreed creating various hybrid subspecies that are healthy and capable of reproducing. There are at this time 25 known subspecies in the tribe Limenitidini and they are typically grouped by region. Butterflies in this tribe are often named after military ranks, most likely due to their relatively large size, flight patterns and brilliant colors.  When scientists and researchers were naming these butterflies the light colored stripes on many of the various subspecies wings reminded them of the epaulets worn by admirals and commodores.

It has also been reported that they will interbreed with the Viceroy, which surprised me. Apparently this is a more common occurrence in laboratories  than in the wild where it only happens occasionally.
I would love to see the hybridized offspring of these butterflies though, it would have to be unique and beautiful.

Males are extremely territorial and will fight other males who happen to flutter into their personal space. Fights among males may last up to 5 minutes with the loser flying away trying his chances in another area. The victor will gloat over his win and take a victory flight around his territory looking for other interlopers. After mating, the females will deposit eggs on host plants about 2 or 3 feet above ground. It is believed she will lay 2 to 5 eggs daily over the course of two weeks. Exhausted females are often found torn and tattered after such a long laborious process. Host plants include Wild Cherry, Aspen, Poplar, Birch, Cottonwood, Willows, Basswood, Oaks, Shadbush, Deerberry and Hawthorn. There may be two broods per season with the last brood overwintering in tiny hibernacula created out of rolled leaves. When spring arrives the tiny caterpillars will become active as soon as their host plants have greened up giving them a food source to finish their lifecycle.

These are very active butterflies and somewhat difficult to photograph unless you can find one basking in the sunlight, which they seem to enjoy doing, Adults nectar at tiny white flowers like Spiraea, and Viburnum, but seem to prefer rotting fruit, sap flows, dung and carrion. While these food choices seem distasteful to us humans, there is a lot of valuable nutrition in the form of minerals contained in these unsavory food options that the butterflies benefit from. 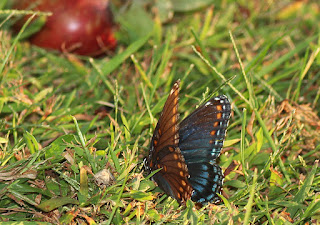