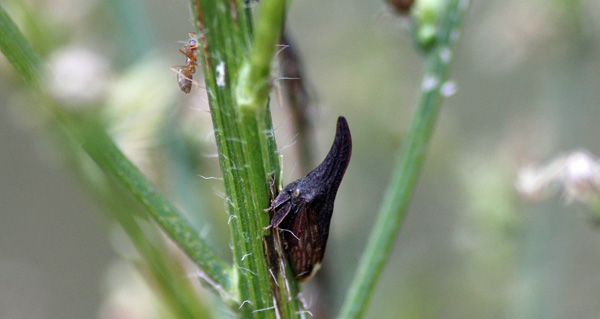 This odd looking thorn-like creature is a widefooted leafhopper (Campylenchia latipes). They have mastered the art of camouflage to perfection. When they sit quietly, unmoving, they are easily mistaken for the thorns they mimic. It isn't until they quickly move around the stalk of a plant that the ruse is discovered. According to bugguide.net this is the only treehopper with the forward facing "horn" on its head. They are brown in color with flanged or wide spread leaf-life front legs. They have large eyes for their overall size. 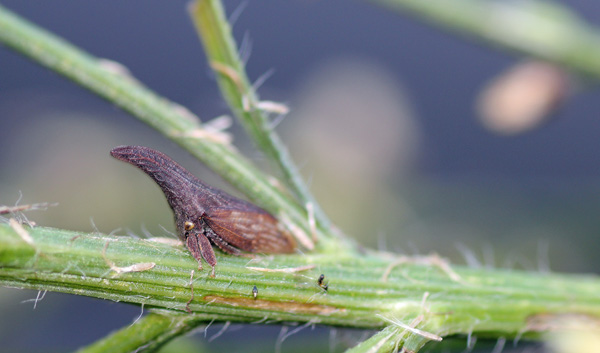 This species is often tended by ants (you can see the nearby ant in the first picture). The relationship to the ants seems necessary for their overall population growth. Individuals that are not tended by ants tend to be susceptible to parasites and fungal infections. The ants consume the "honeydew" that the treehoppers expel from their anus. This is an extremely sweet substance that ants cannot resist. Honeydew that is not eaten by ants can build up and create an environment for fungus. It is this fungus that can kill treehoppers.
Treehoppers are members of the order hemiptera, in the family Membracidae. They have sucking mouth parts and will feed on the juices of plants. This species tends to favor tickseed and asters.
Females lay their eggs at the base of plants. When the eggs hatch the nymphs feed and molt. With each molt they climb higher on the plant. The adults will be more often seen in the late summer or early fall. There will be several generations per year in NW Missouri. The last generation will most likely overwinter in the egg stage.
Posted by Shelly Cox at 3:52 PM