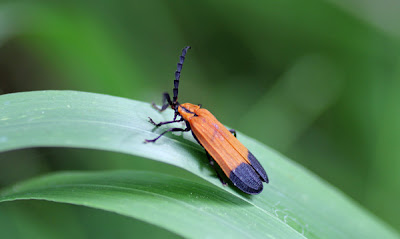 This moth-like insect that looks as if it belongs in the order Lepidoptera is actually a beetle....yes that's right a beetle and belongs in the order Coleotpera. I know the appearance goes against everything we were ever taught about beetles...no hard wing coverings here. Netwings are one of those "exception to the rule" things that we always hear about. This particular netwing is called an End-Band Netwing (Calopteron terminale). They are small to medium sized measuring up to 17mm. Their size is nothing to write home about; what is truly remarkable aside from the fact that they are a beetle that looks like a moth is the coloring. They are vibrant orange and black giving them a decidedly Halloween appearance. They will be found near deciduous woodlands throughout the eastern United States. In Missouri they are found from August to September,   they may be around longer into autumn if the weather is warm enough. 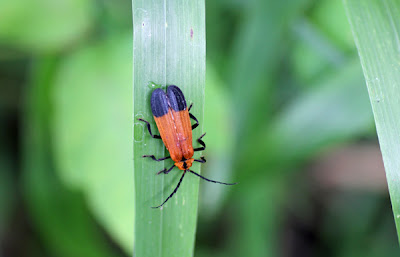 After mating the females will deposit their eggs on or near dying trees. The larvae are predatory on other insects. The adults feed on the juices of decaying plants. This type of feeding habit makes them hugely beneficial.
This little creature proves that we should take nothing at face value, especially when it comes to insects. There are sure to be contradictions where ever you look.
Posted by Shelly Cox at 9:39 PM