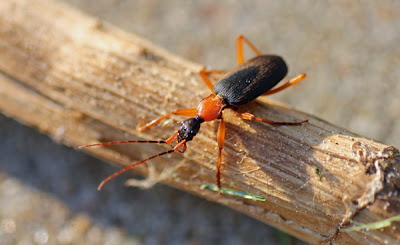 This halloween-colored insect is a False Bombardier Beetle (Galerita bicolor), there are two similar species within this genus, the other is G. janus and the only real way to tell them apart is the shape of the head and pronotum (thorax area). Based on the info provided by bugguide.net I am going with G. bicolor on this one....but it is difficult to tell with such subtle difference separating them. The name bicolor comes from the two-tone black and orange coloring. These beetles are very common throughout their range of the eastern United States. They are commonly encountered in woodlands within or under decaying or rotting timber. I find them equally as often in my basement however. In fact that is where the one pictured here came from. I found an additional one the very next day, this time in a laundry basket. 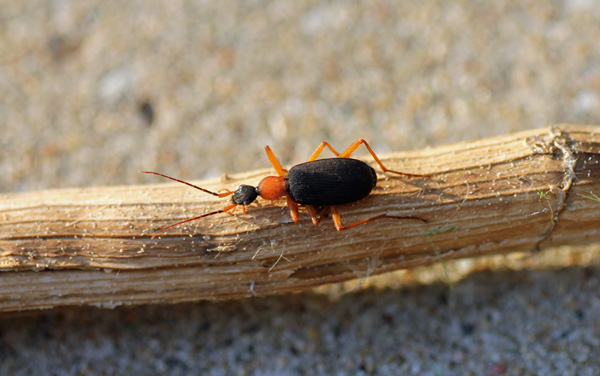 Bombardier beetles have a unique defense mechanism; they can spray acid at their potential predator. False bombardier beetles do not have the same chemical defense as real bombardier beetles, but they are not without resources....they can spray "formic acid" from their backside which is exactly what many species of ants use as their defense....and believe me it is a formidable chemical to have sprayed at you. It effectively "burns" the skin and causes irritation that can last for hours depending upon your own bodies reaction to the chemical. The best way to differentiate between "real" and "false" bombardier beetles is that real ones have a red head as well as a red thorax, whereas false ones have a black head. I cannot say that I have seen a real one, since each specimen I find has the black head.

Finding these beetles is easy, simply turning over logs in the timber will almost always yield at least one, and often times several of these beautifully marked beetles....remember though....look but don't touch!
Posted by Shelly Cox at 10:27 AM