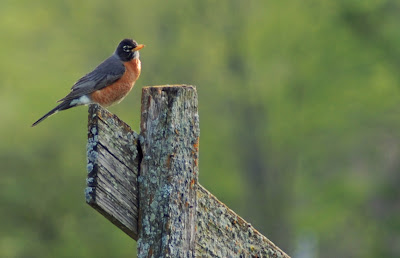 This pretty little bird is probably one of the most recognized birds in Missouri, perhaps even the whole of the United States, this is the American Robin. Many falsely believe that these birds are the harbinger of spring, but in reality they are here year around. The numbers are usually lower in the winter, but they are here nonetheless. Robins are common around homes, hopping around yards looking for worms. Unfortunately, like many birds that hang around human dwellings, collisions with windows are common. Today while I was weeding the flowers I discovered a robin lying dead among the flowers. This always disheartens me, as I hate for any bird to die, especially a death that should be preventable. I actually do have something hanging in my window that should help avoid these collisions, but alas it did not work for this unfortunate victim.
I picked the bird up to properly dispose of it before our dog sniffed it out. When I lifted the body, I discovered that mother nature was already hard at work breaking down the body of this bird body.
If you are easily grossed out or have a weak stomach, this is where you will want to shut your computer off.....or at least exit MObugs......
I warned you..... 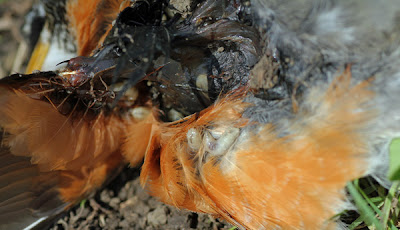 Flies had laid eggs on the freshly deceased body, by the size of the maggots I would guess this happened about 3 days ago. There were dozens of these maggots busily feeding on the flesh, it gave the illusion that the bird was still alive as it writhed with the motion of the feeding maggots. While the smell was a bit overpowering, I couldn't help but watch as these creatures fed. Their bodies moving in a very purposeful way. They even possessed enough sense to retreat from the light, and from my disturbance. Their bodies moved in a very Blob-like way, reminiscent of the way a seal would move. You could see blood circulating throughout the body, within almost transparent skin.

Each segment of the body is visible in this picture, as is the blood-pocket. Fully grown maggots can reach over a half inch in length. Mature blow fly maggots are creamy in color. Maggots have a very typical body shape; the head end is slender and tapers to a point while the rear end is thicker and ends bluntly. The hook-like mouth parts are the only visible part of the head of these flies. The rear end of the maggot has two kidney bean shaped patterns on the end; these are spiracles used for breathing. Spiracles are used to identify the family and species of fly maggots since, superficially, they all look the same. Mature maggots will pupate. The pupa is concealed in a red-brick case called a puparium. These are smaller than the maggot and more circular in shape. Adult blowflies resemble house flies in shape but are often metallic green or blue in color.
Adult blow flies lay eggs on or near rotting vegetation, manure or animals. Eggs hatch very quickly, and maggots begin to consume the decaying food. Maggots pupate and emerge as adults within a few days, depending on the temperature. Total developmental time from egg to adult can happen as quickly as a week, given good conditions, and depending on the species. They develop and consume food quickly, so much so that when a maggot has matured, it moves away from the food source to digest and prepare for pupation. During this movement away from the food, a maggot can travel quite far, up to 100 yards.
Certain live maggots have been employed since ancient times as an economical, safe and effective type of wound debridement. In controlled and sterile settings by licensed medical practioners, maggot therapy introduces live, disinfected maggots into non-healing skin or soft wounds of a human or other animal. They eat the dead old tissue, leaving the live tissue alone. It is uncertain if maggot secretions have any effect on bacterial growth, since different studies have produced contradictory results, and some species of bacteria may be naturally resistant to maggot secretions. As of 2008, maggot therapy was being used in around 1,000 medical centers in Europe and over 800 medical centers in the United States. While it can be a bit discerning to think about maggots writhing in an open wound on our body, it sure beats necrosis and death by infection. We as humans have a natural aversion to all things creepy and gross, and maggots sure qualify as creepy and gross. If you can manage to get past the obvious, and look at the not so obvious one can begin to see they are remarkable creatures. While none of us loves flies that have the potential to spread disease and contaminate foods, we should however marvel over the work their industrious offspring carry out. They are the clean-up crew....consuming untold amounts of rotting, decaying flesh. Imagine a world without maggots, vultures, carrion beetles and other unsavory creatures to clean up the deceased bodies of all manner of creatures. It would be a vile, stinky place. I have a tendency to favor the underdogs of the natural world, and for me these beasties are definitely underdogs. 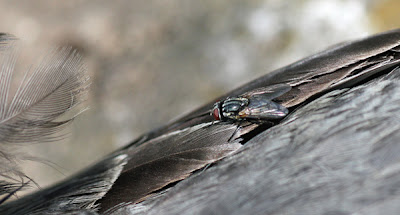 A house fly is attracted by the scent of death, she lands on the wings of the deceased Robin. Perhaps this rotting bird will provide for her offspring as well. So while it is sad that the Robin lost its life, through death it is able to give life to some of natures most loathsome and misunderstood creatures. Mother Nature thinks of everything!
Posted by Shelly Cox at 9:52 PM