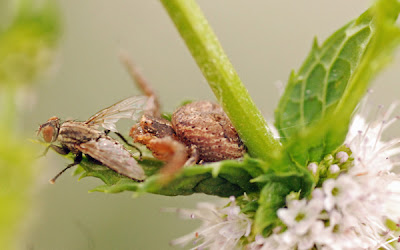 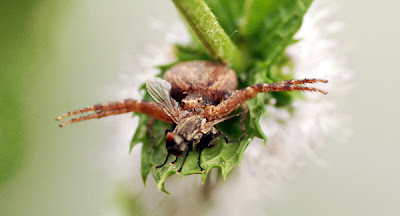 This little brown spider is a Ground Crab Spider. This photo was taken last September, and I watched as this spider sneaked up behind the fly, slowly creeping unseen by the fly. The fly was busy cleaning his face and body using his front legs and saliva to wipe any filth off of himself that may have accumulated there. Little did he know he was about to meet his demise. With rapid movement the spider had captured the fly in the blink of an eye. 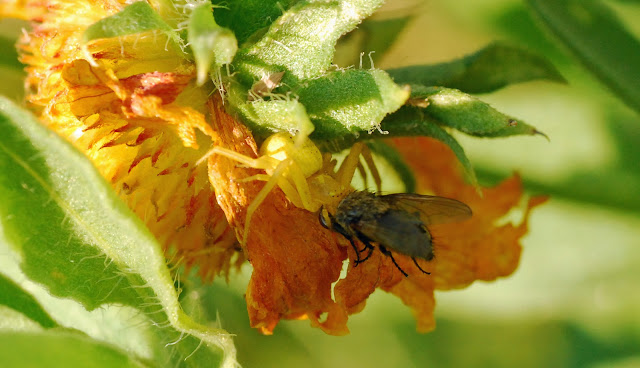 This is a Flower crab spider, that was also feeding on a fly. I came across this one already feasting, so I missed out on the actual hunting tactics of this particular spider. 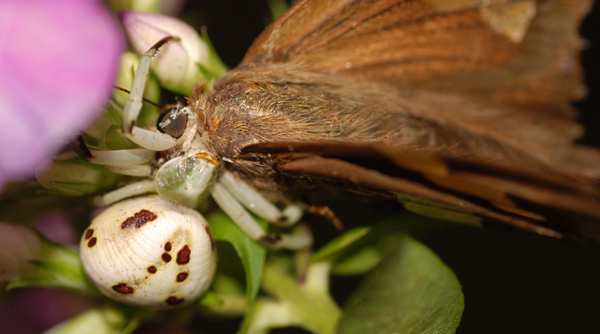 Another flower crab spider, this time feeding on a silver spotted skipper butterfly. This flower crab spider and the one in the previous photograph are the same species Misumenoides formosipes and also go by the common name of white-banded crab spider. 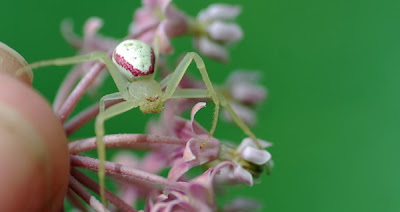 They may also take on this lovely pink and white coloration to blend in with milkweed blossoms and other pinkish colored blooms. This species of spider is one of the most versatile in its ability to change color according to the plants they are frequenting. This makes them masters of camouflage, which gives them an added advantage while hunting for their insect prey. 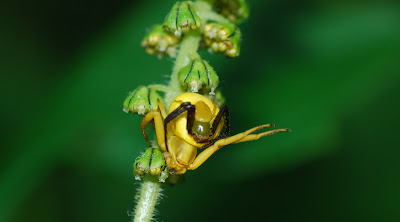 As you can see by this photo the males look different than the females and they are much smaller, in fact almost comically smaller. She looks like she is carrying him piggy-back instead of mating. (James Trager confirmed she is indeed carrying him piggy back and they are not mating. Apparently they are just hanging out together. Rather it is because they have already mated, or intend to is unknown, and he claims this is unusual behavior among spiders).This arrangement must work, because you will see it throughout the spider world.....males are almost always much smaller than the females.


Crab spiders are one of my favorite spiders, they are easy to find, they come in a multitude of colors, they are fun to watch with their crab-like movements and they do not bite when handled. Sometime in April they will begin appearing in the flowers and will be miniature versions of their parents, so small in fact that they are nearly impossible to see without looking closely. They grow rapidly over the summer and reach their adult size by August.