I am featuring another cockroach that is not native to Missouri, mostly because there is nothing moving on the home front due to cold temperatures. This one is called the Discoid Cockroach (Blaberis descoidalis), they are also referred to as the False Death's Head Cockroach. 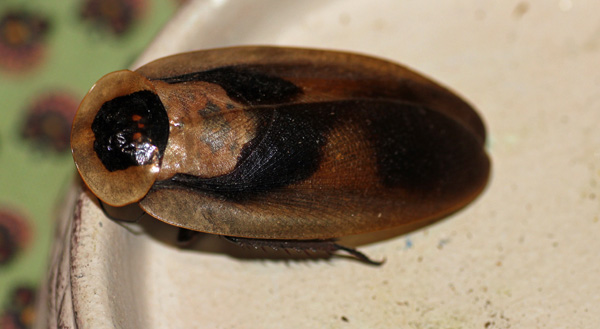 This species resembles the true Death's Head Cockroach, but lacks the tell-tale skull-like marking on the back of the head. This species is larger and breeds more readily in captivity than Death's Head Cockroach.
I've had my colony for 3 years and they have bred exponentially and I feed the excess to my bearded dragons on occasion as a treat. Discoid Cockroaches cannot climb vertical surfaces such as glass aquariums and therefore can be kept in aquariums without lids. They do not fly even though they have wings and can reach lengths up to 3 inches, making them quite large for a cockroach. When my first specimens were sold to me I was told they were deaths head cockroachs and believed them to be so for the past 3 years, it wasn't until tonight that I began investigating and discovered the truth. Apparently 20 years ago someone in the insect pet trade mistakenly referred to this species as the Death's Head and the name stuck.

Tonight when I was feeding my colony I discovered one that was shedding its skin. Even though I've had these roaches for years I've never witnessed this behavior until now. 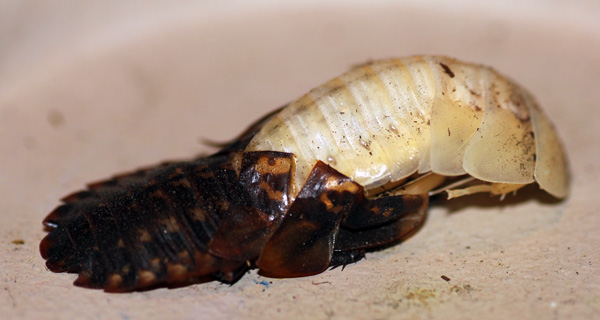 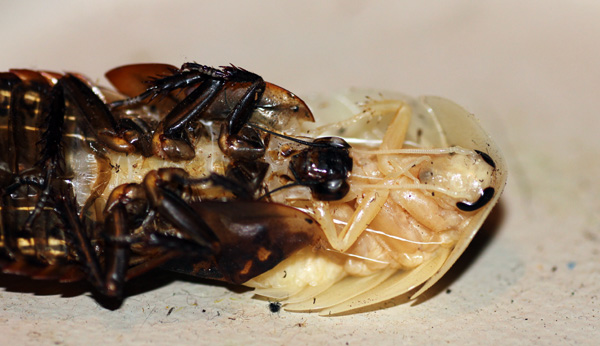 All insects shed their skin as they grow. Each time they shed it is called an instar and most insects must go through at least 5 instars before they reach adult size. When they shed their skin they are very vulnerable because their skin is wet, flimsy and they are unable to move quickly They will also be much lighter in color, often white or yellowish. It may take several hours for their skin to dry out and to darken.  You can see by these images that it is completely white as it crawls out of its previous dark shell.

There is very little odor associated with this species. In fact crickets kept in captivity smell 100 times worse than this species. They are easy to take care of, they require only a protein based food like cat food, dog food or monkey chow. Left over fruit and vegetables are a favorite food as well. Fresh water supplied in a shallow dish and egg cartons for them to climb on and you are good to go. They do not bite or sting, and unlike cockroaches that invade houses, apartment complexes and other human dwellings they do not spread disease.

Cockroaches have long been a favorite of mine, especially these larger species. With over 4,000 species worldwide there is no shortage of interesting specimens to study and appreciate. 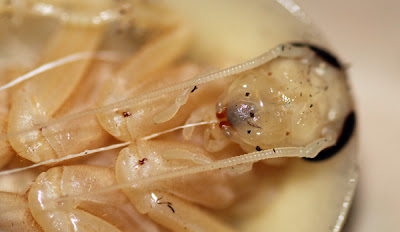 (Here is a close-up of the cockroaches mouth parts.)
Posted by Shelly Cox at 9:37 PM