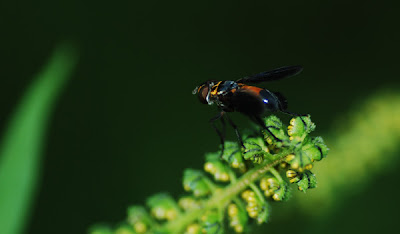 This pretty little black and orange fly is called a Feather-Legged Fly, I believe this particular one is Trichopoda pennipes. They are found throughout the United States, and are usually associated with tall grassy areas. They are mostly black with shades of orange on the abdomen and thorax. The hind legs have feathery projections on them from whence they get their common name.

After mating, the female will seek out a true bug (i.e. stink bug, squash bug, etc.) on which to lay her eggs. The eggs will hatch and the larvae will burrow into the bug and begin feeding. Only one larvae will exist in each true bug. Eventually a fully formed maggot will develop and exit from the body of the true bug. Soon after this the true bug will perish. The maggot will pupate in the soil and in about 2 weeks will emerge as an adult.

Even though these bugs are used extensively in agriculture to help control the destructive population of damaging insects such as Green Stink Bugs and Squash Bugs, it is debatable how much good they are actually doing. While it is true that they parasitize approximately 70 to 80 percent of true bug populations in areas where they are released, the fact remains that the true bugs are still active and feeding. They will also mate and lay eggs. It takes some time for the fly larvae to have an impact on the true bugs life cycle. So in the time it takes for that fly maggot to wreck havoc the true bug as also done its fair share of damage.

The adults will be found taking nectar from various flowers. It is common to see the adult females hovering over gardens seeking their true bug victim to lay eggs on.
Posted by Shelly Cox at 12:30 PM