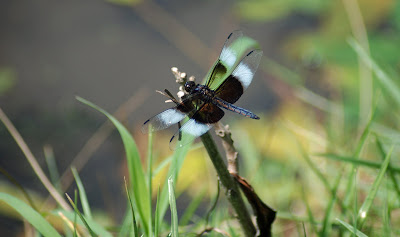 This beautiful dragonfly is the "Widow Skimmer" (Libellula luctuosa) They are probably the most frequently encountered dragonflies on our farm. These beauties are found throughout most all of the United States, the only exception being the Rocky Mountains. They can even be found in Mexico and Canada. 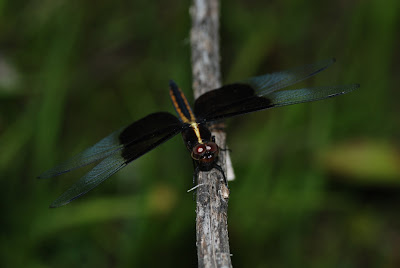 Males have dark brown to blackish spots on their wings, bordered by white. There will be a yellow stripe running down the middle of their body. This stripe fades with age and the body will be ashy gray or white in appearance. Adult females and immature males have the same dark patches as the adult males minus the white border. These dark patches is where this dragonfly gets its common name. The species name of luctuosa translates into sorrowful or mourning. These dark patches must have resembled the traditional mourning cloaks worn by individuals suffering a loss.

Males will aggressively defend their territories from other males. They will perch and patrol for females, on constant guard, and ready to give chase to any male that happens to enter his territory. After mating, the female will lay her eggs in the water, either on bottom sediment or on aquatic plants. After hatching the nymphs will live an entirely aquatic life for about one year. They will then crawl out of the water onto a nearby stick or plant and shed their exoskeleton for the final time. The newly emerged dragonfly is very weak and susceptible to predation at this time. It can take several hours for their wings to fill with fluids and for the outer skin to harden, allowing them to take flight.

Look for these dragonflies in a wide variety of habitats, including near lakes, and ponds. They will also be seen in meadows or open fields searching for their insect prey.
Posted by Shelly Cox at 11:20 AM