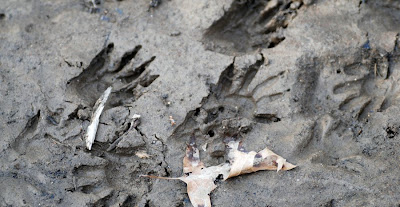 The woods behind our house practically called out to me this evening "Come explore". I donned my rubber slop boots and some old clothes, grabbed the camera and headed out to see what I could find. The wind was blowing fiercely, blowing my hair in my face, making in next to impossible to see anything beyond my brown hair. This called for a ponytail. Once the ponytail was in place, I headed into the woods, and discovered the floor of the woods had turned into a creek. Water was flowing  right over the ground and creating mud so thick and deep that I sunk up to my ankles. I could hear the suction sound the mud was making as I tried to pull my boots free. I nearly left the boots in the mud and came away with nothing but socks! If only I could tread lightly like the raccoons who left those hand-like tracks behind in the mud. Obviously I was going to have to find an alternate route through the timber.

After climbing up a bank, fighting some nasty thorn bushes, tripping over a log (which I managed to break open, and not break my neck). I found this pretty little metallic sweat bee. She found a nice, cozy spot to hunker down for the winter. She was a bit sluggish, and bit less then thrilled to be disturbed. I apologized for waking her (yes, I,  on occasion talk to bugs), and took her picture. 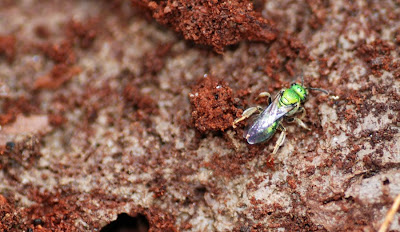 I kept moving forward and discovered some beautiful green moss clinging to the moist decaying logs on the forest floor. There were tiny little blooms shooting upwards off the cushiony bed. There is something so pretty about moss. After all the snow this past winter (40 inches worth), we have no shortage of moisture, and therefore a perfect habitat for moss to grow. It was everywhere in the timber 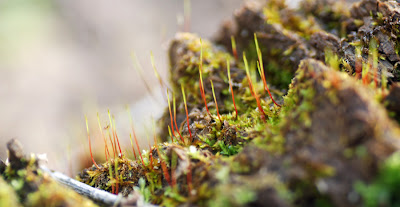 Next I found the remains of a large tree. Lightening struck this tree many years ago, and left nothing but an overgrown stump behind. I jumped the mini-creek, managed to not get sucked in the mud and looked to see if any creatures lurked inside the rotting stump. I proceeded to lean on said stump, and knocked the damn thing over! Once again I avoided falling and potentially breaking my neck, or at the very least hurting my pride. This stump was so far gone that the bugs didn't even want it!!! Except for this lonely multi-colored Asian lady beetle, who apparently had this trunk all to herself. 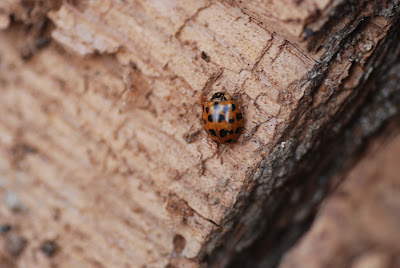 Right next to this stump was a tall Shag Bark Hickory tree. These are one of my favorite trees. Their bark is unmistakable. When I give hikes with school children I always stop in front of the ShagBark Hickory trees and ask the kids if they like the cartoon Scooby Doo. They always say "YES!"
Then I ask him them if they can find a tree in the woods that looks like Shaggy....they all point to the ShagBark Hickory. Then I ask them to hold up their little fists, and try to guess what creature will hide out under the shaggy bark of this tree during the hottest parts of the day. Many guesses are shouted at me.....a mouse?....a snake?....a Squirrel ? (These are for the big fisted kids).....I give them another hint...."it flies". BIRDS!!!! nope....."It comes out at night" BATS!!! "Yeah!" 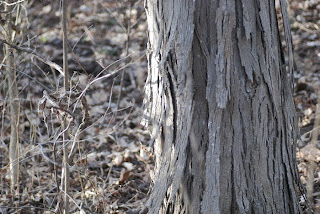 Not far from the ShagBark Hickory was a rotting log, right next to the log were the remains of some unfortunate creature. At first I could not figure out what pieces or parts these were. After posting this image on Facebook someone told me they thought it was a pelvis, but to what they had no idea. 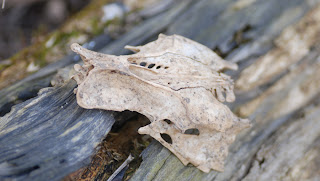 
Next I stumbled (literally) over another log, and turned it over and discovered an unknown grub underneath.
It's obviously a beetle, but which one? 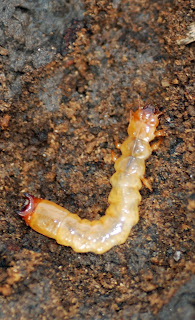 Lastly as I exited the timber I noticed a very small, shiny beetle resting on a dead plant. It was barely 1/4 inch in length, with a very rounded body. The sun glinting off its wings gave it a shiny green appearance.
So while it wasn't the most perfect of weather conditions with the winds blowing 30 mph, it was warm (75 degrees). It felt good to get outside and turn over logs, break open stumps, and even knock over a tree (even if it was on accident) just to see what was out there. In case you couldn't tell, it was a LONGGGGG Winter! 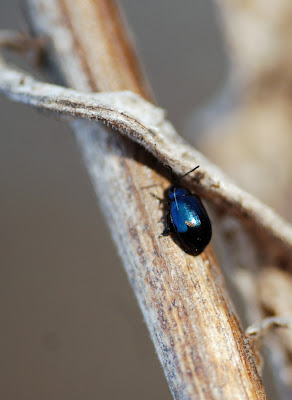