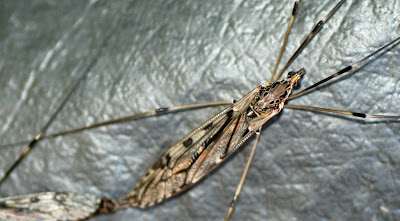 This beautiful insect is a Giant Crane Fly (Tipula abdominalis), they are found throughout Central and Eastern North America. They can be found anywhere there are fresh water streams. These are very large flies, like their name implies. Females measure 5 1/2 inches front to back. Males are generally smaller. The one pictured here was actually a pair mating, they were stuck to the side of our grill cover. My husband hollered for me, he had found a cool insect for me. I rushed to see what he had found, and was shocked to see these huge flies. I had never seen anything like them. I snapped a few pictures and sent one to Bugguide and they ID'd them as the Giant Crane Fly. They remained together for well over an hour. I finally lost interest in them and when I returned later they were gone.

After mating, the female will lay her eggs within the water, and the young nymphs will live a completely aquatic life. They prefer streams where there is sufficient underwater dead or decaying vegetation. The nymphs are called Leatherjackets.  They will feed on the rotten leaf litter. There will be two generations per year, one in the spring and another in the fall. Many people mistake these large flies for mosquitoes, they are in the same order, Diptera, but they lack any functional mouth parts and therefore cannot bite humans. They do somewhat resemble mosquitoes with those long legs and thin body, and even their nicknames of "Mosquito Hawk" and "Mosquito Eater" elude to them being mosquitoes or perhaps fond of eating them. Neither is true. They are completely harmless to humans. Handling them will be far more dangerous to them, than it will be to you. Their legs are very fragile and become detached with the slightest of efforts. These flies are often attracted to lights at night and will found at your porch lights.
Posted by Shelly Cox at 10:25 AM