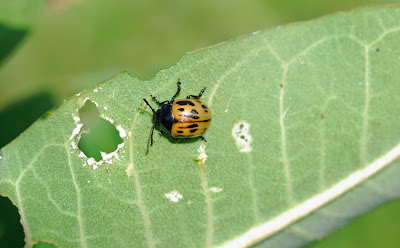 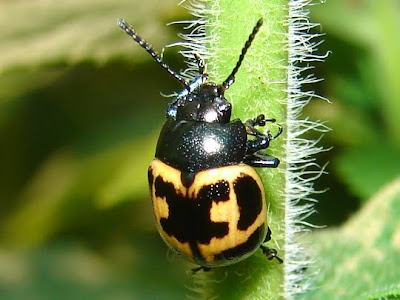 Swamp Milkweed Beetles (Labidomera clivicoliis) are found throughout the Eastern United States and parts of Northern Mexico. Reaching about 1/2 inch as adults, they are rather small to medium sized beetles, but striking in their markings. Their coloring varies by specimen, they can be bluish, or greenish-black with orangish or reddish-tan elytra (wings).
Most will have a distinctive "X" across the midline of the elytra (wings), like the one pictured below. Not all specimens will have this marking, the one I photographed was lighter in color and lacked the "X" on its back. (at right).
These beetles are common, at least that is what most reports claim, but the one I photographed here is the first I've ever seen. They can be found in ditches, along roadsides, in meadows, almost anywhere there is swamp milkweed or common milkweed. The adults feed on the foliage and flowers of milkweed, the larvae will feed on the leaves. Both adults and the young will cut side slits in the leaves or stems of milkweed to help drain away the sticky substance from the center of the milkweed to reduce it at the feeding site.(I don't know if you have ever had milkweed sap on your fingers, but trust me they could make glue outta this stuff!) Adults overwinter in leaf litter at the base of milkweed plants. Late in the spring they will become active again and begin feeding. Shortly thereafter they will seek mates. Females frequently mate with more than one male, and they may remain with a single mate for up to 40 hours. (OK...I'm going to resist the urge to comment here!) Bred females will lay eggs in small clusters on the underside of milkweed leaves. Shortly after laying her eggs she will perish. The young feed on the milkweed, and in a couple of weeks after reaching full size they will drop to the ground to pupate. Later in the summer new adults will emerge and the cycle begins again.
2nd Swamp Milkweed Beetle image was provided by Steve Scott