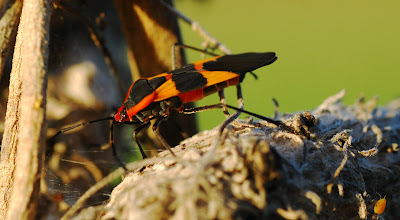 Large Milkweed Bugs (Oncopeltus fasciatus) are insects in the family Hemiptera, or True Bugs. They reach lengths up to 3/4 of an inch, and are brightly colored black and orange. There is a large black triangular marking that extends from the back of the head to the center of the wings. Across the mid-portion of the wings is a wide black band. These bright colors are a warning to potential predators that they taste bad. This unpalatable taste comes from the milkweed plant that they feed from, which is also where they get their common name. They are found throughout the Eastern and Southwestern portions of the United States. There is also a population in Ontario Canada. 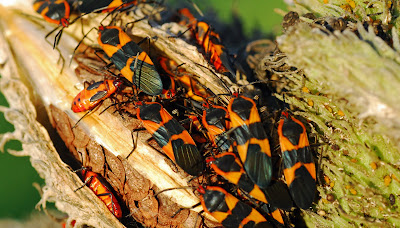 After mating, the female will deposit eggs at the rate of about 30 per day within the milkweed pod. She is capable of laying up to 2000 eggs in her lifetime. That is a lot of Large Milkweed Bugs! After hatching it takes the nymphs approximately 4 weeks to reach adult size. The adults overwinter in leaf litter. They will be found in all types of habitats like meadows, fields, along roadsides, backyards, most anywhere there is milkweed or dogbane. 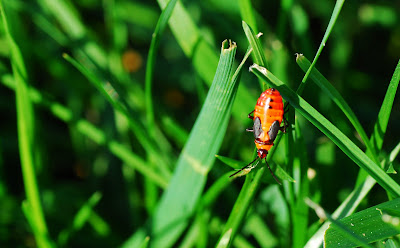 Every year I have these bugs in large numbers, but this year I had a few minorities among the majority. I was greatly puzzled by a young nymph I spotted with all the other Milkweed nymphs. As you can see this nymph is brightly colored with orange and red, and looks very different from the other nymphs. In fact it looked so different I thought it was a different species entirely. I sent this image to Eric Eaton from Bugguide.net and he was unsure of what it was. 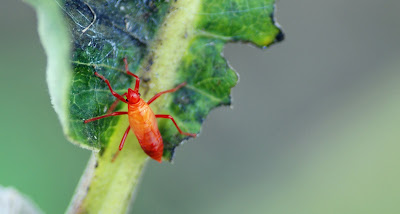 About a week later this little nymph took on a completely different look, as you can see by this picture. So once again I fired off another email to Eric, and this time he knew exactly what my mystery bug was. It is a newly emerged Large Milkweed Bug, whose wings have not dried out completely! Imagine my shock, to have discovered these unusual morphs. There were only two of this color variance and I was excited to find them. 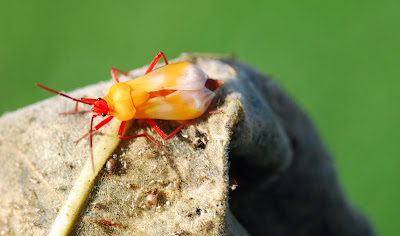 It just goes to show, when you think you have it all figured out, something comes along that makes you realize you haven't even begun to figure it out.
Posted by Shelly Cox at 4:25 PM