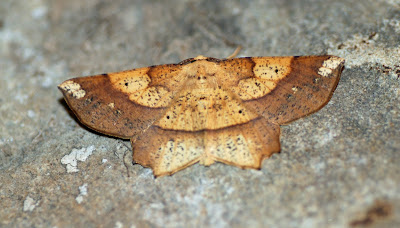 This pretty moth is the Deep Yellow Euchlaena (Euchlaena amoenaria). They are a member of the geometer family of moths. They are found throughout Eastern North America. This one was photographed at the porch light of our cabin in Townsend, TN. With a 2 inch wingspan they are fairly large for a geometer moth. It is not known what the adults eat, or even if they do. Very little is reported on the life cycle of these moths, there isn't even a host plant recorded for the caterpillar. It can probably be assumed they feed on any variety of trees like most geometer moths. One identifying characteristic of this species is the light patches near the wing tips. This will help distinguish them from another similar species called the Saw-Wing moth. They both have deeply scalloped wings. The coloring of this species is patches of yellow and reddish-brown. They are quite lovely and would easily be camouflaged against the bark of trees.
Posted by Shelly Cox at 9:20 AM