Yesterday was a gorgeous day, especially for Missouri in Mid-July. The humidity was low and the temperature topped out at 82. My good friend Lu and I went to Platte City to visit a Conservation area called Platte Falls. We couldn't find many walking trails, but we did find some mowed roadways that we walked. We saw numerous insects, a few herons, and ducks, and thousands of frogs and one Blue racer (that crossed our path twice). At the end of one of the roadways we found this little pond on the verge of drying up. There were three herons, and two ducks sitting in the water. We promptly scared the herons with our presence and they took off for the hills. The little ducks remained behind and we had some difficulty identifying them. Lu thought they were pintails. When we headed back up the roadway to return to the car, her and I were visiting and laughing. I was in the lead and she was about 4 feet behind me. 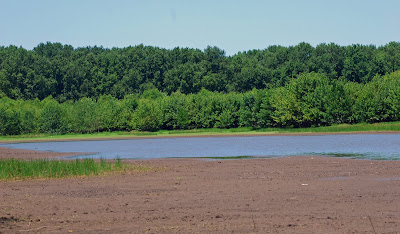 All of the sudden I got clocked in the eyeball by an insect. It felt like a rock hit me. I let out a few expletives! She said I think it was a dragonfly...I said nope KATYDID! I saw it up close and personal, my eyeball was still throbbing. It landed in a tree about 20 feet away. I told her I felt like going after that Kamikaze Katydid and teaching it a lesson. Lu said "yea!..... it will be a KatyDEAD instead of Katydid"! I was thinking the whole time "Just let me get ahold of that thing" Ever see that moment in Alice in Wonderland where the queen yells "Off with their head?!" 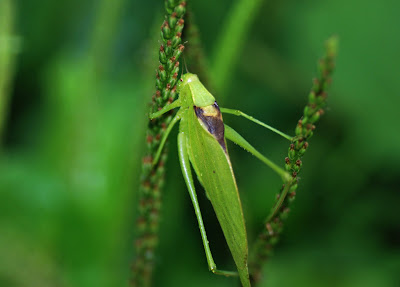 I have no idea why that Katydid came at my face like it was shot out of a cannon, but it definitely got my attention. Katydids in the order Orthoptera are cousins to the grasshoppers and crickets. There are many types of Katydids in Missouri in various types of habitats. Many will be found in grassy areas like meadows, farmlands, pastures, or mowed roadways... Most are bright green and blend in well with blades of grasses and leaves of trees. Some species will have shades of yellow, brown or black on them as well. They feed on the foliage of various plants and trees. 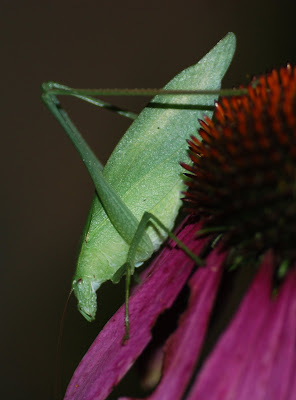 Probably the most familiar aspect of the Katydid is not its looks but its song. They join the nighttime chorus in mid-summer and belt out a lovely melody of Katy-DID-katy-DIDN'T. Each species will have a little variance in their song, this helps them locate mates. After all if all the songs sounded the same it would be a free for all when it came to the mating scene. This individuality in harmony also helps us locate them. It is possible to recognize them by song alone, if you are patient enough to learn them. Just don't get in their way!
Posted by Shelly Cox at 9:19 AM